Free shipping available on any orders over $100

In Vancouver and around British Columbia we have so much incredible marine life that this list is an almost impossible task. We are happy to hear about what your ‘must-sees’ are, whether that means the encounters you’ve had here that are most memorable or the ones that you can’t wait to actually happen. For the sake of this list we will include only relatively likely encounters, but watch for a few more exotic honourable mentions below. Also, we are focusing on fauna here, not that BC’s waters are lacking in diverse and interesting flora. In no particular order:

Now, these little guys may not be starting the list off with a bang, but they’ve eluded me so far and so they’re a bit of a unicorn to me. They’re cute as heck, about an inch big and not the most graceful swimmers. They come in a variety of colours and are often found fairly shallow amongst seaweed. Also, could you ask for a more descriptive name?

A larger and slightly more familiar sight for locals, harbour seals are the puppy dogs of the sea. These pudgy marine mammals are often very inquisitive when they come across divers, sometimes tagging along for the whole dive or trying to demand belly rubs. Playful and curious they can be found all over the coast and bring some extra fun to a dive.

What list of mind-blowing BC marine life would be complete without mentioning these almost mythical fish? Six Gill Sharks are rather massive (up to 20ft long), prehistoric beasts that typically live in the very deep ocean and for some reason come up to BC waters each summer (July-September). Lately we’ve had great luck spotting them in Barkley Sound with Rendezvous. But every year or so a couple lucky divers spot one in Howe Sound.

Like I said, this list is in no particular order. If I were ranking my absolute favourite encounters then Giant Pacifc Octopuses (GPO) (yes, that’s the correct pluralization) would have to be number 1. These cephalopods are unbelievably intelligent, displaying advanced problem solving skills and learning through observation in tests. And they have pretty individual personalities. They often hide and it is easy to swim right past a large octo out and about due to their ability to change colour and texture. If you’ve ever had the good fortune to have a GPO decide to check you out, then it is easy to see just how intelligent they are. I could go on with a million more reasons why these 8-legged giants are one of the best parts about diving in BC (found all over the Pacific Northwest), but we’ll save that for another article. 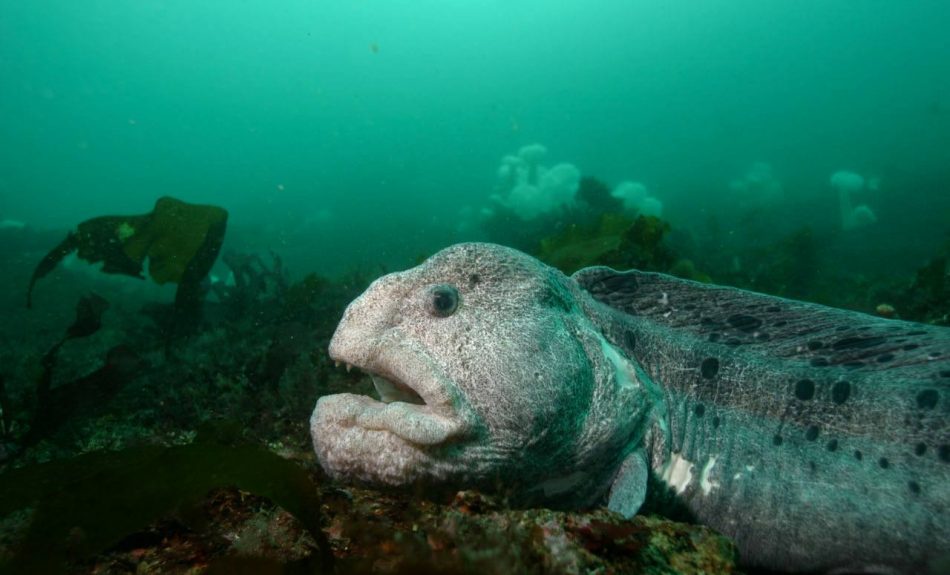 These elongated fish are known for resembling Statler and Waldorf, the grumpy old hecklers from the Muppet Show. However, they are far from grumpy. Wolf eels easily grow over 6 feet in length and can be super curious about divers. They mate for life and like to stick to the same den so when you find one or a pair, you can often visit again and again.

These sleek, speckled, cartilaginous fish are relatives of sharks and rays and you can see some of the similarities when you see them swim by. They sweep effortlessly through the water and tend to be spotted more in the evening or at deeper depths. These graceful fish can be spotted from Howe Sound to Port Hardy.

Okay, now I am just cheating – but we have so many beautiful nudibranchs to just choose one or two to include on a top 10 list. For those that are uninitiated to the wonderful world of nudibranchs, they are a sea slug. But hear me out: There are thousands of different nudis around the globe. We are lucky enough to have an unbelievable variety of them in BC from rather dull little white blobs to huge, foot-long bright orange monsters like the aptly named Orange Peel Nudibranch. Some of these invertebrates are fringed, many are vibrantly coloured, and most are an underwater photographer’s dream. And some, like the Hooded Nudibranch, smell like watermelon.

If you are all about colourful critters, then as far as crabs are concerned, the bulky Puget Sound King Crab (PSKC) is your guy/girl. These large, well-armoured local crabs are clad in a vibrant orange, blue and purple exoskeleton that actually helps them camouflage with the vividly coloured soft corals, anemones and sponges often found in areas like Campbell River, Port Hardy, and the Sunshine Coast. Closer to home, it isn’t unusual to spot the bright orange juveniles at Whytecliff Park from time to time.

We have both Steller Sea Lions and California Sea Lions in BC. These huge marine mammals, like the smaller harbour seals mentioned above, can be very nosy when they encounter divers. Most of the time this involves swimming around us and making us feel appropriately clumsy as they swoop through the water. However, sometimes the experience becomes a little more tactile. Try avoid eye contact, especially while exhaling (bubbles) to show these powerful animals the respect they deserve.

Another animal that I have yet to encounter personally, white-sided dolphins move through BC in pods, sometimes even in so-called ‘super-pods’ of hundreds of animals. These beautiful creatures are a classic looking dolphin, able to spin and leap through the water. Seen all over the coast, from Vancouver to Haida Gwaii these animals have occasionally been known to check out divers when they’re in the area.

And as promised, some honourable mentions. These are the animals that are more “wish list” encounters than anything else. Creatures that have been spotted in BC – indisputibly – but are not known to frequent our coast in any significant numbers or with great regularity. (Please feel free to correct me if I am incorrect about that with any of these animals.)

The largest bony fish in the sea and one of the more bizarre looking, the great Mola Mola is occasionally seen cruising the west coast of Vancouver Island waters from time to time, particularly during el Nino years.

Once a common sight in BC the population here was essentially driven to extinction by the fishing industry and government eradication program because they were seen as pests. These are the world’s second largest shark next to the whale shark and like their larger cousin they also eat plankton so they pose no real threat to people. This past week there was a documented sighting of one of the gentle beasts along BC’s central coast.

Not a stranger to BC’s waters at all, but it is unusual to see a Grey Whale underwater while diving. That being said, it has happened – more than once – off of Nanaimo.