Free shipping available on any orders over $100

Home / Explore / Sinking for the Annapolis Announced for January 17th 2015

We received this letter today from the ARSBC about the scheduled sinking on the 17th of January of the HMCS Annapolis.

“As you are aware, the ARSBC made arrangements for the sinking of the Annapolis to proceed on January 17, 2015. Unfortunately, a group of citizens from Halkett Bay has recently commenced legal proceedings to challenge the validity of the ARSBC’s permit from Environment Canada. They have asked the Court to prohibit the ARSBC from carrying out the sinking until the full legal proceeding is completed. Yesterday afternoon the Court made a temporary order prohibiting the ARSBC from carrying out the sinking until a full court hearing can be held to determine the of issue of whether the project will be delayed to allow for a full review of the Environment Canada permit. That Court hearing is scheduled for January 27th. It is possible that we will be able to proceed with the project shortly after January 27th, but at this point we are in the hands of the Court and it is not totally clear when we will be able to re-schedule the sinking. 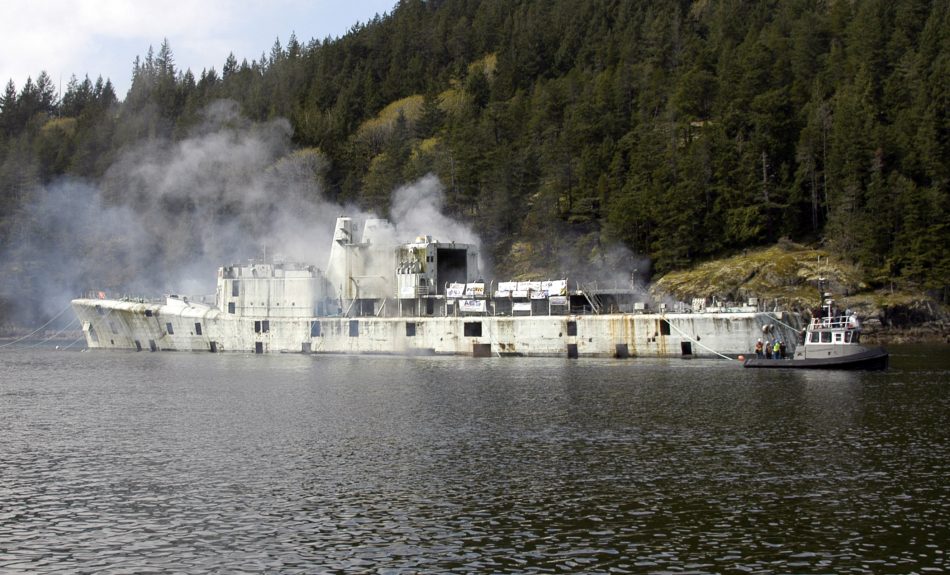 I apologize for this late change of plans. I assure you that the ARSBC is doing everything it can to move matters along to successfully complete this project.

This is the information we received on the 5th of January 2015.

A press announcement was released today by the Artificial Reef Society of British Columbia stating that “we are moving forward with plans to sink the former HMCS Annapolis, a 366 foot (110 meter) helicopter-carrying destroyer- escort to create an artificial reef in Halkett Bay Marine Provincial Park on Gambier Island, British Columbia.”

This Annapolis has been being prepared for the better part of four years and will be one of the cleanest artificial reefs known in the world. There will be two steps to the sinking of the ship. Step one will have the ship towed from Long Bay, also known as Port Graves, to neighbouring Halkett Bay on January 13, 2015 for anchoring over the sink site. Final preparations will be made before sinking on Saturday January 17, 2015. The sinking is expected to take place in the late morning and is a weather dependent event, we advise watching our web site for updates. The viewing public is welcome to attend via watercraft from an establish stand-off distance.

“We are deeply appreciative to all our volunteers for their hard work and dedication to the Project. And a special thanks to the many who remained confident in our determination during the more difficult periods of the Project”.

A large number of photos including examples of undersea life and previous projects can be found on the ARSBC website at www.artificialreef.bc.ca.